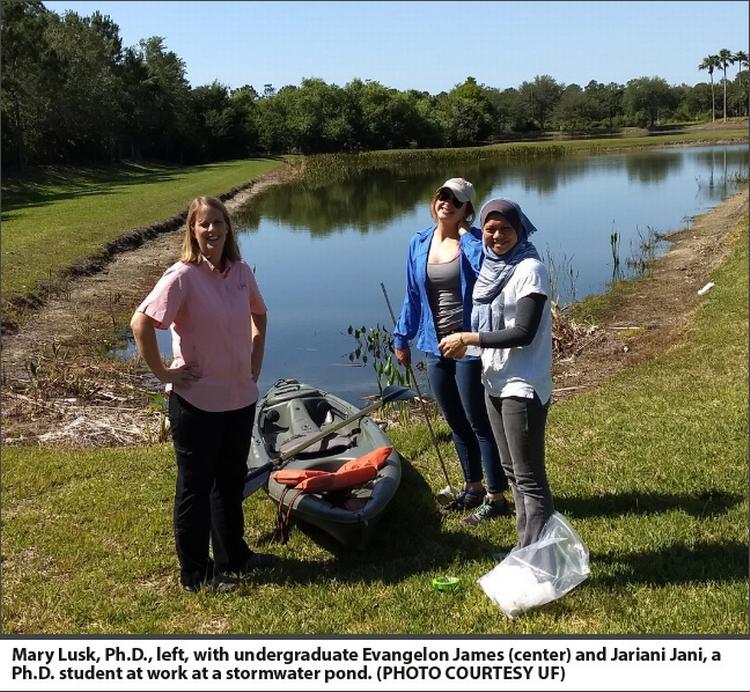 Scott Angle: Green industry has the tools to turn stormwater ponds into filters

A developer installs it to protect neighborhoods from flooding. Homeowners see it as an aesthetic amenity. Scientists see it as a manmade innovation whose environmental effects have not been fully explored but could have a tremendous impact on your industry.

Mary Lusk, Ph.D., calls the stormwater pond the “black box” where constructed world meets natural world. Ponds capture runoff—which can contain grass clippings, pesticide residue, fertilizer—and in some cases funnel it to nearby rivers. What happens to that runoff as it passes through ponds is the mystery of the black box.

Lusk and AJ Reisinger, Ph.D., argue it’s high time to start unraveling that mystery. After all, there are an estimated 75,000 stormwater ponds in Florida. Lusk and Reisinger will make the case for learning more about them at the eighth session of the Urban Landscape Summit on March 10.

Lusk and Reisinger say, from what they can tell so far, the ponds do not perform as well as perhaps hoped in removing nitrogen and phosphorus. This means potential triggers for algal blooms may get passed from residence to river.

But it doesn’t have to be this way. If their theory is correct, the green industry has the tools to turn stormwater ponds into filters—plants, and the people who know how to establish them.

I’ve personally seen the wonders of the plant as a tool to clean up Chesapeake Bay. Before I became an administrator, I was among a pioneering group of faculty in the field of phytoremediation, a process that employs plants to remove, stabilize or destroy contaminants in soil and groundwater.

I also did research on rain gardens, what you might call stormwater ponds’ usually dry cousins. They’re basins designed to temporarily hold rainwater and are planted with water-tolerant trees, shrubs and flowers. I saw evidence they were useful in filtering oils and heavy metals from parking lot runoff.

The complexity of Florida’s water quality challenges means no potential paths for pollution should remain unexamined, especially if there’s potential to turn them into remedies.

Though both members of the UF/IFAS Soil and Water Sciences faculty, Lusk and Reisinger approach stormwater ponds from different perspectives. Lusk has long examined runoff and its connection to water quality. Reisinger is more of an ecologist, looking at the pond as an ecosystem to examine how living things, from critters to algae, interact with each other.

Lusk has a strong relationship with Manatee County’s  Lakewood Ranch community, whose residents and management highly value their dozens of ponds and want to keep them algae-free for both aesthetic and environmental reasons. Reisinger monitors ponds in smaller communities in the Gainesville area.

What they learn about stormwater ponds over the next five years could guide future government and homeowner association policy on residential fertilizer rules, placement of ponds within communities, what gets planted in and around them, how HOAs maintain them, and more.

Ultimately, the hope is their findings could inform the making of a list of most beneficial plants and where to put them. That might change the look of a pond. It might also increase its filtration function. We just don’t know.

If Lusk and Reisinger can muster the resources to direct their scientific teams to research these overlooked amenities, it could add function to what your customers see as form. I hope their talk on March 10 inspires people to take a fresh look at stormwater ponds and others to take a first look at them as something that can be more than ornamental.

Scott Angle is the University of Florida’s Vice President for Agriculture and Natural Resources and leader of the UF Institute of Food and Agricultural Sciences (UF/IFAS).

President's Letter: Rolling into our busiest time of year!
March 4, 2021