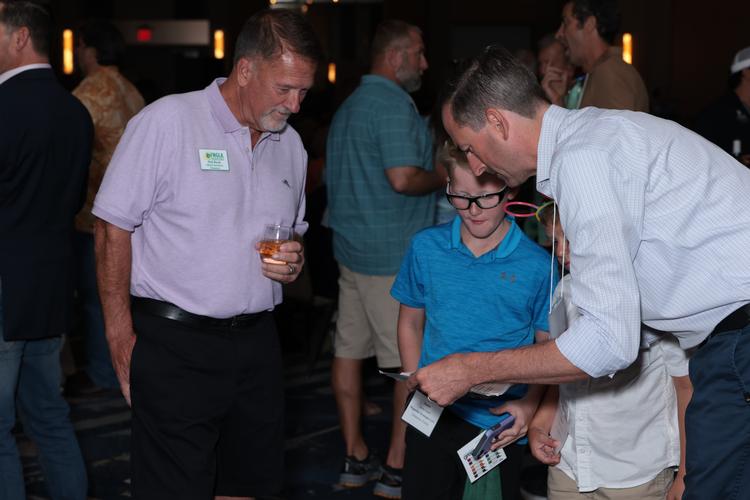 I recently attended a family reunion disguised as a trade association convention.

Maybe you know what I’m talking about. Resort pool filled with kids splashing. Fairy door scavenger hunt. New association president sworn in with his father on one side and his 2- and 4-year-old sons on the other. A poignant good-bye from a CEO who reflected on how association members had supported, sustained and loved him through his first dark days as a widower.

If you were at the FNGLA Annual Convention in June, your family was, too. That’s true whether you brought your spouse and kids or not. Everyone seemed to regard their fellow members as relatives they hadn’t seen in too long.

The pattern was everywhere I looked. When I invited incoming secretary/treasurer Phillip Hisey to lunch, I ended up sitting with and talking more to his 13-year-old son and 11-year-old daughter. Outgoing President Sarah Spatola came to the Wedgworth Leadership Institute reception with her two boys, ages 7 and 2. Tal Coley told me becoming the new CEO is a tremendous professional honor but also an opportunity to reconnect with his family roots in the Jacksonville area.

Spatola and Eric Smith—he with his dad and wife and kids at his swearing in—say the family-friendly atmosphere of FNGLA in general and the convention in particular has encouraged people like them who are busy with young families to extend themselves to serve the association. As a result, you don’t need to wonder what the next generation is thinking. They’re leading the organization.

The convention seems designed to foster the familial vibe. Smith says that as he selects the venue for FNGLA 2023, he’ll be looking not just at meeting space but at the kids’ menu, the pool, and what games they can set up on the rooftop for the Friday night social.

Family is part of the fabric of the industry. The FNGLA roster includes numerous multigenerational businesses. The Strodes come to mind, of course. Spatola works for her father at Ecologel. Martin Hackney not only went to work in the family business, but he followed his father’s footsteps in serving as FNGLA president for 2020-21.

Smith and Spatola said it is important to them to expose their kids to the industry early on. It’s their hope that their children develop a sense of the career opportunities, the special relationships and the fun of the plant business. They find that those potential green industry heirs are more receptive to the message when it’s couched in French fries, a waterfront room and a side trip to Gatorland Wildlife Park.

Family isn’t just the future. It’s history. Association veterans watched Ben Bolusky’s children grow up at these conventions. Maybe Ben knew it was time to retire when he realized they had become 20-somethings. UF/IFAS Environmental Horticulture Professor Tom Yeager in his Wendell Butler Award acceptance speech thanked FNGLA for letting him be part of the family for 40 years.

FNGLA didn’t need a pandemic to blur the line between work and family. That blurry line apparently has long been one of the association’s strengths.

While my spouse enjoyed the convention, too, I’m not sure I’m ready to bring the grandkids next year. But I won’t decide for sure until Eric lets me know if there’s cornhole and Jenga on the agenda.