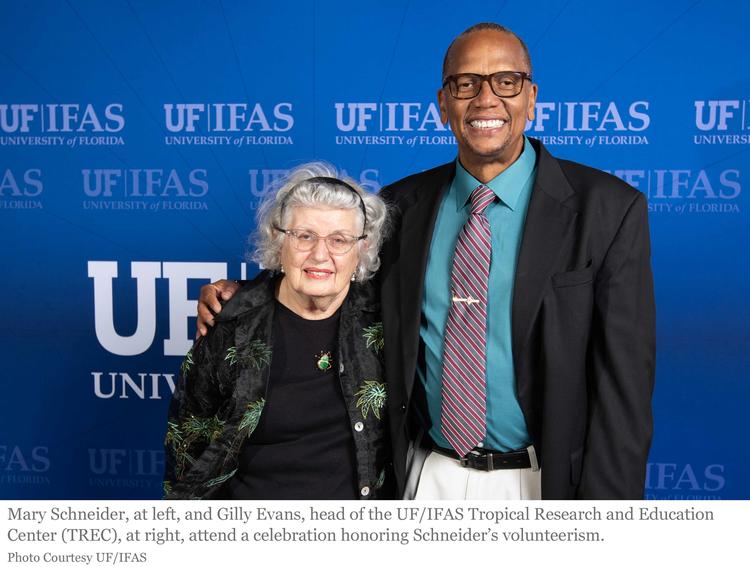 If you’re an FNGLA member based in South Florida, chances are you know the voice. It invites you to an event. It asks you to support students. It sometimes asks you for money for an FNGLA or UF/IFAS program.

Gilly Evans, who leads the UF/IFAS Tropical Research and Education Center (TREC), once heard the voice at 3 a.m. He instantly recognized it as belonging to Mary Schneider, the uber-UF/IFAS-FNGLA volunteer who apologized profusely for the accidental call while texting him an idea.

Her calls to top agricultural officials in Washington and Tallahassee were NOT accidental in 1992. Hurricane Andrew had destroyed nearly every square inch of the nurseries in Dade County. Mary was shocked and hurt to be advised by a federal official that the nursery industry was classified as a “hobby.”

She responded by calling USDA offices to tell them of the hundreds of jobs lost at just one nursery in Dade County. She called governors’ offices throughout the southeast to plead for recovery aid. She called state agricultural officials.

She got the attention of the top one. Bob Crawford, the Florida commissioner of agriculture at the time, not only tried to call Mary, but he also tried to see her by attending a Miami-Dade FNGLA chapter meeting. Mary welcomed the commissioner and then told him, “Sir, you do not need to talk to me. These people (chapter members) are who you need to be talking to.” Then she left to go to the county fair to present FNGLA awards for student horticulture exhibits. Commissioner Crawford’s visit generated the momentum which resulted in the green industry being declared an agricultural entity eligible for government program support.

Mary is still making calls. Recently was recruiting attendees for our November One Night in the Tropics event at TREC. She asks for donations, and once she gets pledges, she drives to the nurseries to pick up checks if necessary.

For years Mary has written checks for TREC student scholarships, and she’s even secured donations from businesses as far away as South Carolina. To reduce costs for organizers, Mary and her husband, Al, have cooked for numerous UF/IFAS events, once baking 25 key lime pies for a previous One Night in the Tropics.

When the hibiscus bud weevil threatened one of Miami-Dade County’s most lucrative plants, Mary was a part of the team that collected $25,000 from growers to fund TREC’s research program to guide the response.

UF/IFAS recently selected Mary from among our thousands of unpaid supporters as UF/IFAS volunteer of the year. We celebrated her at what we call our Dinner of Distinction.

The evening event was a way to show our appreciation for decades of service. She said afterward she felt treated like a queen. She was invited to the podium in an elegant room full of distinguished attendees, starred in a video shown to the ballroom audience and posed for photos with FNGLA CEO Tal Coley and others. And, she and Al didn’t have to cook a thing.

Three of her students from the 1992 graduating agriculture class attended to honor their high school ag teacher. She was delighted to see former Extension Dean John Woeste, who hired her as a Miami-Dade agent in the 1990s.

These days Mary is as much an asset for whom she knows as what she knows. UF/IFAS Miami-Dade Extension Director Teresa Olczyk said she has rounded up community support for 4-H. Mary and Al have cooked for ag tours showcasing TREC, Extension, and local FNGLA nurseries. And Mary uses that phone, sometimes asking Olczyk which commissioner she should call to ask for support for Extension.

I’m glad we could give Mary an award and surround her with friends and well-wishers. What we didn’t give her was my cell phone number to call in the middle of the night! But her persistence and persuasiveness as a volunteer has inspired me to support Olczyk, Evans, local FNGLA members and growers, 4-H and students so much that she will never have to call.